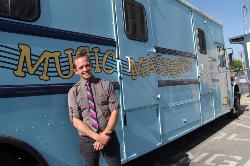 Rowland Unified School District is proud to announce that our Music Teacher Mark Anderson is a quarterfinalist for the Music Educator Award™ by the Recording Academy® and the Grammy Foundation®.  Press release is below.

Mark Anderson is not only driven to inspire young musicians across the Rowland Unified School District, but he actually “drives” the innovative mobile music bus “The Music Machine” to bring music to six elementary schools each week! Anderson teaches Elementary Band, Orchestra and Mariachi. (He teaches at Hollingworth, Hurley, Jellick, Northam, Oswalt Academy, and Shelyn). A classically-trained bass player, he is often called a “Renaissance Man” since he can pick up and play any instrument. Anderson is honored to have been nominated by one of his students for this award.

“The most important thing for me to pass on to my students is a love for learning something new,” said Anderson. “That can be math, reading, auto mechanics, learning a new trick on your skateboard or learning to cook – anything – just falling in love with the process to learn something new. My goal is to give them the confidence to take on any challenge that they are faced with.”

Recipient and Finalists to Receive Cash Honorariums, with Generous Support and Resources Provided by the GRAMMY Foundation®'s Education Champions:

WHO:             A total of 222 music teachers from 208 cities across 41 states have been announced as quarterfinalists for the Music Educator Award™ presented by The Recording Academy and the GRAMMY Foundation®. In total, more than 7,000 initial nominations were submitted from all 50 states.

WHAT:           The Music Educator Award was established to recognize current educators (K – college, public and private schools) who have made a significant and lasting contribution to the field of music education and who demonstrate a commitment to the broader cause of maintaining music education in the schools. A joint partnership and presentation of The Recording Academy and the GRAMMY Foundation, this special award will be presented at the Special Merit Awards Ceremony (honoring recipients of the Lifetime Achievement Award, Trustees Award and Technical GRAMMY® Award) during GRAMMY Week 2015.

As announced on the 55th Annual GRAMMY Awards® by President/CEO of The Recording Academy and GRAMMY Foundation Neil Portnow, TV and radio host/producer and GRAMMY Foundation Honorary Board Chair Ryan Seacrest, and nine-time GRAMMY®winner Justin Timberlake, the award was open to current U.S. music teachers, and anyone could nominate a teacher — students, parents, friends, colleagues, community members, school deans, and administrators. Teachers were also able to nominate themselves, and nominated teachers were notified and invited to fill out an application.

One recipient will be selected from 10 finalists each year, and will be recognized for his/her remarkable impact on students' lives. The winner will be flown to Los Angeles to accept the award, attend the GRAMMY Awards ceremony, and receive a $10,000 honorarium. The nine finalists will each receive a $1,000 honorarium, and the schools of all 10 finalists also will receive matching grants. The honorariums and grants provided to the finalists and schools are made possible by the generosity and support of the GRAMMY Foundation's Education Champions: Converse, Disney Performing Arts, Ford Motor Company Fund, and  Journeys. Nominations for the 2016 Music Educator Award are now open at www.grammymusicteacher.com.

WHEN:           A complete list of quarterfinalists can be found at HERE. The semifinalists will be announced in September. For more information, please visit www.grammymusicteacher.com.